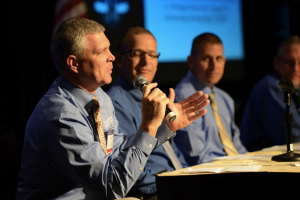 Curt Trampe speaks at the annual Reunion in 2014. Curt’s Springfield, Illinois, location was awarded Franchise of the Year for 2015.

The DreamMaker Bath & Kitchen design franchise is proud to recognize our Springfield, Illinois, location as Franchise of the Year. Curt Trampe, owner of the franchise, earned the award by working to effectively introduce the company’s new software to his peers and by doubling his business over the past year. The award was announced during the company’s 2015 Reunion.

"We have a great team, and it's fantastic — especially when you have a great year,” Curt says. “With the year we had last year, we were able to take a big chunk of profits and write big bonus checks to employees, and seeing the shock on their faces … that was pretty cool."

Curt relocated his business to a bigger, 5,800-square-foot office on a busier street and constructed a new Design Center that’s been showcased among his franchising peers during Next Level Group meetings.

“I tell potential franchise owners that the networking of owners is the most advantageous part of the franchise system,” Curt says. “This is a great opportunity to do that with Next Level visits.”

Curt is also leading the way in implementing EMT2, a software program that projects time and materials needed for a particular job. When jobs are finished ahead of time, remodelers get a bonus. This new software tool gives employees an incentive to be more efficient. It also brings the best carpenters out of the woodwork because they know they can provide quality and timely efficiency while making more than the base salary.

DreamMaker Bath & Kitchen is a remodeling franchise that helps entrepreneurs and remodelers earn strong financial numbers while focusing on their quality of life. Our franchise owners enjoy much stronger margins than most remodelers, and their customers report much higher satisfaction. DreamMaker's business practices are guided by biblical principles of service, respect, and integrity, and are key to our success.

DreamMaker has helped existing remodelers take their operations to the next level by providing training, systems, and support. Those same resources also have helped entrepreneurs without a remodeling background launch businesses that are among DreamMaker's top performers.

Bath and kitchen design franchise dishes out other awards

DreamMaker Bath & Kitchen design franchises in Ann Arbor, Michigan, and Elizabethtown, Pennsylvania, were two of the three finalists for Franchise of the Year.

Sales Leader of the Year: Ann Arbor franchise; other finalists were Springfield, Illinois, and Ogden, Utah.

Woman of the Year: Heather Sewalson of Ogden, Utah

Next Level Awards: Everett and Patty Gray of Bakersfield; Bob and Jennifer Ender and Lee and Brenda Willwerth of Ann Arbor; Michael Fischer of Lansing, Michigan

For in-depth details about the DreamMaker remodeling franchise opportunity, download our free franchise report. You can also learn more by visiting our research pages.