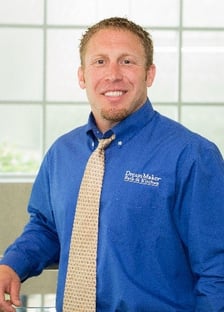 Jay Nutting was born and raised in Wisconsin. He went to college at the University of Wisconsin, where he earned a degree in mechanical engineering. Jay is a husband to his wife Stacey and a father to an eight-year-old son. When Jay is not working, you can find him with his family staying active through outdoor activities such as boating, skiing, and running triathlons.At DreamMaker Bath & Kitchen, we appreciate each of our franchisees and we would like to share their journey with DreamMaker.

After graduating from the University of Wisconsin, Jay pursued a career in crash test engineering developing seat belts and air bags. During his free time, he found stress relief through remodeling and designing. After 12 years as an engineer in the automotive industry, Jay was looking for a change. He was searching for a new engineering position on a job board, when he came across an advertisement for DreamMaker. At first, Jay did not have an interest in franchising; however, he clicked on the ad, and four years later, Jay is successfully operating one of our franchises in Wisconsin.

Jay researched other franchise opportunities, but none of them stood out compared to DreamMaker. DreamMaker attracted his attention because of our business strategy and how we require design centers.

Jay’s time as a franchise owner has not been without struggles, yet he understands the time and effort needed for growing a successful business. In the beginning, Jay played many different roles from production manager to the accountant. Over time, Jay grew his team and gave up the many “hats” that he had to wear in the beginning. Currently, Jay is the general manager and sales manager. The past four years have included ups and downs for Jay, but overall, more ups than downs 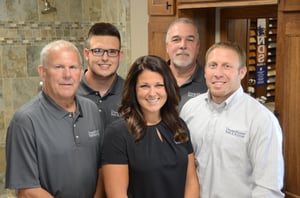 Jay said it best, “Buying into DreamMaker is not a magic potion to make you wealthy; however, you will have an unlimited potential of resources and human power to help you become a successful business owner.”

What Do Other DreamMaker Corporate Team Members Have to Say About Jay Nutting:

“Jay was in the corporate world but finds the hands-on challenges of owning a business much more invigorating. Setting goals and reaching them...hiring people and seeing them excel... learning a great sales system...acquiring and developing an office and design center...all these challenges and more make owning a Dreammaker franchise fun and rewarding. Jay is a positive thinker even when his initial plans do not succeed. He keeps his focus on the goals and does what it takes to get there. He's a winner!”

“Jay has come along way from selling being out of his comfort zone. The first year at a 14% close ratio from a Raw Lead to a Contract and this year is at 28% which is 10% over our network average. “

We hope you enjoyed reading about DreamMaker’s Southern Lakes, Wisconsin owner, Jay Nutting! Keep an eye out for our next Franchisee Spotlight next quarter. If you would like to hear more DreamMaker owners talk about their journey from Corporate America to DreamMaker, watch the video below.