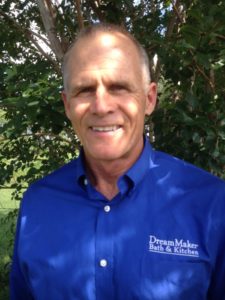 Marty Cherrie considers himself a “cradle-to-grave construction guy.” The former commercial and residential builder has been part of the construction industry his entire adult life, working alongside his father for decades before taking over the family business.

Then, 2007 brought the Great Recession. As sales stalled and banks called in loans, Cherrie was left in a situation, like many other builders, in which projects already underway could not be completed. After 25 years of owning successful businesses, “I was broke,” he said.

After 50 years in California, a new job with a national real estate firm led him and his wife, Sandy, to San Antonio. He loved Texas, but not the new job. After a lifetime as an entrepreneur, being an employee was an uncomfortable yoke, so he started looking for new opportunities that would fully tap into his skills and know-how.

This is his story.

What did your previous business look like before the Great Recession hit?

I had four commercial properties. One was the property that a Harley Davidson dealership I owned sat on; one we were developing for spec either to sell or lease; another was an occupied multi-tenant building. The large commercial speculative property that we were building wasn’t done when the bank froze the construction loan, and that set the dominos falling.

Once you were ready to start a new business, what attracted you to remodeling?

First of all, I built a ton of houses in the 80s and 90s. Of the 200-plus houses I built, probably 95% of them were built then, and it was part of a national surge in home construction because of demand from Baby Boomers. As a result, there are now millions and millions of homes in that 20- to 30-year-old age range, and it’s time to remodel.

What attracted you to DreamMaker?

DreamMaker has great systems for managing the remodeling process, which is very different from home construction. I did a little bit of remodeling work with my old business, but I never had an integrated system that would actually flow through the process of meeting with the people as they decided what they wanted, implementing it, then staging the project phases and providing benchmarks to help with follow-through.

DreamMaker franchisees meet with vendors during the remodeling franchise’s annual Reunion, held in Austin, Texas, in 2016.

How would you describe the culture of the company?

One of the things I was surprised about when I first started researching DreamMaker was their values, which seemed to line up with my own, which was a pleasant surprise. But I wondered if they walked the talk. After an interview and evaluation process, I met with both (recruiter) John (McCue) and (President and Chief Stewarding Officer) Doug (Dwyer), and saw that they were both followers of Yeshua (the original Aramaic name for Jesus). That was very interesting, and it was clear that the core values of the company weren’t just slogans on a wall. They were actually living it. Since I have gone through training, I’ve found that the adherence to the core values is actually stronger than I thought it would be.

How was the training process?

There was a lot. When I look at their estimating software, it resonates with my brain and the way I look at a job and how I would evaluate a job. They really do have a lot of systems in place to help you to be successful and help you provide great customer service. As a wild old philosopher once said, “A man’s got to know his limitations,” and systems are not my strength. I knew I needed systems to follow, and DreamMaker’s are very thorough.

Do you have a designated business coach?

I will be working with Greg Friebel on an ongoing basis.

As you learn more about DreamMaker, what do you think help makes the brand stand out?

They offer an incredible customer experience. When we were evaluating my territory, they mystery shopped competitors to gauge customer service levels, and there was nobody that reacts to customers the way DreamMaker trains franchisees to react. There’s a very clear process for how to handle calls, how to handle leads, how to listen to customers and guide them through our process to sign contracts. The attention to detail follows through in the way projects are set up, and the way they stage everything — all the parts that will be needed to complete a job — which allows you to then complete jobs from beginning to end with minimal downtime. The staging and other processes help make the remodeling process very efficient, which is good for the bottom line and great for the customer. What I came out of training understanding is that the system really is very integrated and has integrity, which helps us go out into the marketplace and live up to our core values.

Given your history as a homebuilder, do you plan to stick to remodeling, or explore other construction opportunities, too?

I am not afraid of anything. I have gotten some leads for new home construction, and that’s a definite possibility, but I’ll have to decide whether it makes sense. When we were in training, I asked if they would have a problem with me doing homes and they said, “No, but you probably won’t want to do them, because you can’t make the type of money you can make if you are following our system properly.” The profit margins on new construction are much lower, so it makes sense to remodel kitchens and baths and do more of them, because you can make more money that way, and you also keep your lead carpenter busy, which helps them make money and helps you attract and keep skilled people.

For in-depth details about the DreamMaker remodeling franchise opportunity, download our free franchise report and start a conversation with us. You also can learn more by visiting our research pages.