DreamMaker remodeling franchise is focused on strong margins, quality of life for franchisees

What’s it like to be a DreamMaker Bath & Kitchen franchisee? With the remodeling franchise in the midst of a national expansion, DreamMaker owners have been sharing their stories to help potential DreamMaker franchisees understand what life is like in the business. Here’s a bit of what they’ve been saying. For more, visit our blog to read in-depth interviews.

“Well, Doug Dwyer is an excellent leader. There are no smokescreens. They are what they say they are. We receive excellent business coaching, and they are continually looking at new ideas and improving systems. They work hard, and they have put us on the national map. They deserve a lot of credit. I don’t think we’d ever have been part of the Remodeling Big50 if not for us being part of that national network. It’s a wonderful organization.”
— Patty Gray, who owns DreamMaker of Bakersfield with her husband, Everett. The couple were named to the 2014 Remodeling Big50 list, which recognizes excellence in the remodeling industry.

“I still have the same CPA I used when I was a banker, and he asked me, if you were still at the bank, how much would you have made last year? And every year since I left the bank, even during the downturn when I was doing some consulting on the side, I have made more money than I would have made at the bank. I’ve worked more hours, but bottom line, I’ve done better. What I made last year? There’s no way I would have made half of that doing what I was doing. So, again, that’s the upside. To some degree, the sky is the limit.”
— Steve Betts, a former banker who owns two DreamMaker Bath & Kitchen locations in Texas. 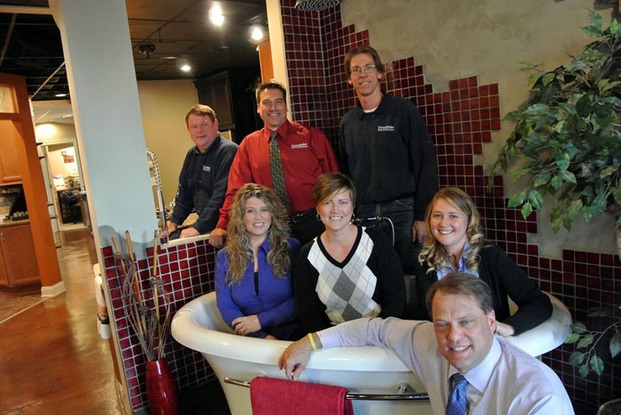 “The support from DreamMaker starts with Doug Dwyer and his commitment to treating people right, and it just telegraphs down to everyone. I’ve never heard them say “no, I can’t help you with that.” They are always willing to help and willing to spend time to help me. They are methodical, and they are very supportive. You become part of a family with them. They are interested in your life, not just your royalty fee. At our annual Reunion, it’s more than just about dollars and cents. Doug goes out of the way to make sure people’s lives are improving and lifestyles are becoming better. There’s a concern there, and you can see it.”
— Ed Gribben, owner of DreamMaker Bath & Kitchen in Stuart, Florida. He expects his son and son-in-law to take over the family business.

“The budgeting and planning process DreamMaker offers helped us fine-tune our other business and think more strategically to develop a long-term growth plan. I knew a lot of that stuff from my time in corporate America, but when you own a smaller company and you have fewer people to assign tasks to, some of that planning goes by the wayside. DreamMaker’s systems help us stay on top of it and keep an eye on all the pieces so that we’re working on the business, not just in the business.”
— Steve Coombs, a former engineer and architect who owns DreamMaker Bath & Kitchen of Ogden, Utah, which was named to the Remodeling Big50 list in 2013.

Ready to learn more? DreamMaker’s average same-store sales increased 23% in 2013, and to understand the business model and culture that is driving growth, visit www.dreammakerfranchise.com.