Brent Bailey enjoyed a highly successful two-decade-long career as an industrial designer and corporate executive at Viking Range. Things were going great in his professional life. There was no real concrete reason for him to change course, but Brent felt something stirring inside, a voice that said, “You need a change.”

It took some soul searching and a willingness to ask difficult questions of himself, but Brent ultimately decided to buy a DreamMaker remodeling franchise. He phased out of his corporate job, and is now preparing for a midsummer launch of his new franchise in the Huntsville/Madison County area of Alabama.

Those who know him best are already celebrating.

“I can’t tell you how many people have come to me and said, “This is exactly what you need to do. It’s perfect for you,” Brent says. “I couldn’t be happier about this new direction.”

We spoke with Brent recently about his big career change and what attracted him to DreamMaker. 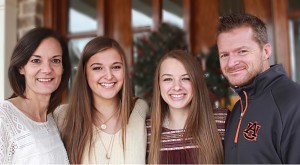 Tell us about your background as an industrial designer. Can you explain why you decided to pivot to a new career as a DreamMaker remodeling franchisee?

I was fortunate at the age of 16 to stumble on the right major and career path. I was artistic as a kid. I got involved in things that involved creative and off-the-wall construction. I discovered the School of Industrial Design at Auburn University early on. After I graduated from Auburn, I started graduate school at North Carolina State.

Most people aren’t familiar with an industrial designer, they think they’re the same as an engineer. We are like an architect is to a building. Architects don’t necessarily do the building or contracting, but they have a vision for what a final product should look like. Designers are responsible for orchestrating and designing every little surface you touch and see.

There’s an affinity between industrial design and remodeling. Actually, my hobby is working on the house. I don’t care if it’s my house or someone else’s. I just enjoy the process of problem-solving and building things. I custom-built my own house from scratch.

Mid-career changers are often victims of downsizing or being pushed out of corporate jobs. That’s not the case with you since you weren’t forced out of your executive position. In fact, Viking Range wanted you to stay. Can you walk us through your decision-making process?

When I was hired by Viking in 1996, they were looking for an industrial design manager or a junior designer. I really didn’t have the experience to be a manager, and I had more experience than a junior designer status. I was thrown into the fire. Early on, I was given the opportunity to create a design studio and have a staff. It evolved into an extensive department that included everything from product design to corporate identity. We won many awards, and I learned a lot. I learned to hire people smarter than me.

I was the director of industrial design when Viking was acquired about four years ago by a public company. I adapted to a lot of changes. We brought product design, industrial design and marketing under one umbrella and severed relationships with our ad agency, PR and web development company. We brought them all in house. We functioned as well — or even better —  than previous years, despite being on a shoestring budget and having a staff that was almost cut in half. I was awarded promotions, and I was compensated well. I was proud of what we did, and I maintained great relationships.

I woke up one day and realized I wasn’t doing what I was meant to do. I thought, “I’m crunching numbers; I’m not being creative; and I’m not having the impact I want to have.” I’ve always had a yearning to have my own business. Not a big corporation but a smaller regional business that could incorporate my design skills. It sat on the back burner.

Over the past few years, I managed to handle so many things on the job. Behind the scenes I was learning many of the elements needed to run my own business. Learning to deal with risk, stress, multitasking and capacity. I knew I wasn’t going to move from Viking to take another job. I wanted to start on my own. I started doing research on small business ownership.

How did you get interested in franchising in general and the DreamMaker remodeling franchise specifically?

I believe there’s a strength in franchising, especially when you find the right personal match. A great franchise has to have good systems put in place. I didn’t have a small business mentality or experience, so I really struggled with making a decision for six to eight months. I became  increasingly frustrated. I’d always been secure in whatever I was doing.

I ended up exploring all kinds of options. For what seemed like a long time, I didn’t know what to do. I knew I wanted to move to North Alabama. At the same time, I had to make sure I was following God’s will. If it were God’s will for me to go to Wisconsin, then that’s what I was going to do.

I was restless one night and couldn’t sleep. It sounds silly, but I thought “There has to be something I can Google that can ‘magically’ give me some guidance.” I logged onto FranchiseHelp.com and answered a string of questions. DreamMaker popped up as a very, very strong match for what I like to do. It looked like a great fit.

The hook that really got me with DreamMaker is its Code of Values. It’s really special and unique to a business. The more I’ve gotten to know Doug Dwyer, Amy Mosley and the entire DreamMaker team, the better I’ve felt. John McCue, DreamMaker’s franchise recruiter, called and introduced himself, and we ended up having an hour-long conversation that led to an eight-week process of evaluation. 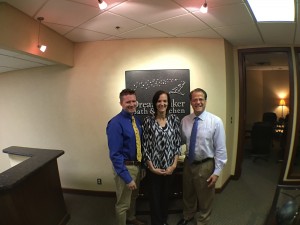 My experience with the DreamMaker team only further affirmed that they live their Code of Values. I ended up going to DreamMaker on Dec. 18 and had a great day with John and the rest of the team. I had an incredible one-on-one with Doug. By the end of that day I felt like we had a verbal agreement to move forward. I think we both felt like it was a great fit.

You left your job at Viking on March 31. How’s the transition going?  When will you launch?

Leaving the job wasn’t easy. Plus, Greenwood is a wonderful community that’s really difficult to say goodbye to. I’m ingrained in the culture in there. I’ve been active in the Lion’s Club.  Both of my daughters were born and raised in Greenwood. One daughter is graduating from high school next month and going to ‘Ole Miss in the fall. I have a sophomore in high school, and she’s ready to go to Alabama. She’s excited.

We’re in the process of moving to the Madison County area near Huntsville. I was born and raised in Florence, Alabama. My sister and her husband live in Athens, Alabama, and my parents moved from Florence to Athens about four years ago. My territory is within minutes of them. I couldn’t be more thankful for the way things are working out. I’m going to start in July. I don’t need to rush it. I’m not going to stumble out of the gate.

Do you think there are other executives like you out there who don’t have to leave their jobs, but deep down might want to make a change?

It’s kind of interesting to see the reaction of my peers. As recently as yesterday, I received an email from a colleague wishing me good luck and telling me he’d been thinking about doing something similar. Sometimes you just need to see someone else take the step. In the corporate world, you tend to get very comfortable. To step outside the corporate life can be really scary, but if you have a calling to do it, I think it’s important to listen to that urge. 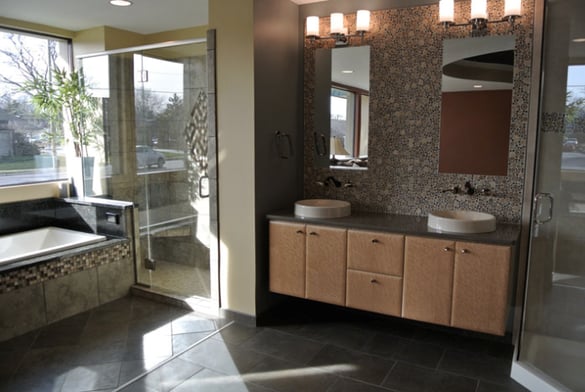 Custom bathroom and kitchen remodeling are DreamMaker’s specialty, but DreamMaker also offers systems that help remodelers efficiently tackle other remodeling projects, which makes it easier for remodelers to win repeat business from customers.

Looking to your new career as an owner of a DreamMaker remodeling franchise, what are you most excited about?

I’m looking forward to the diversity of things I’m going to be dealing with and the challenges I’ll be facing every day. I’m excited about serving different clients. I’ve lived in a professional world where projects take two or three years to come to fruition. Now I’ll be working with clients now who may have a bathroom that will take a few days to design and a week to build out. I also know what it feels like to be burned by a company. I want to make sure clients walk away satisfied. Customer service is paramount, more important than anything.

For in-depth details about the DreamMaker remodeling franchise opportunity, download our free franchise report and start a conversation with us. You also can learn more by visiting our research pages.